Many reviews of Batman v Superman: Dawn of Justice seem to forget one fact: Zack Snyder has a distinct directorial style. As I’ve noted before, anyone who buys a ticket for any film by the director of 300 and Sucker Punch—which includes Batman v Superman—and is offended by the lack of subtlety and Loki-style humor has not considered Snyder’s reputation as a director.

A director’s signature style matters. I would not see a Tarantino movie if I wanted a kid-friendly romantic comedy; I would not expect a film by Sam Mendes to highlight the positive qualities of suburbia; and I would not look for Spaceballs-style comedy in an Iñárritu film. Zack Snyder was never going to allow Batman v Superman to look or feel like Joss Whedon’s lighthearted and arguably formulaic Avengers films.

Below are ten reasons why Batman v Superman: Dawn of Justice is an entertaining and impressive movie.

Critics enjoy mocking the excessiveness of Superman’s Metropolis-based battle against Zod in Man of Steel. Shortly after the movie premiered, the hazard-assessment team at Watson Technical Consulting quantified the damage. According to the team, “in terms of the strictly physical damage done to the city, the initial estimate is $700 billion.” And the death count is equally striking: “129,000 known killed, over 250,000 missing (most of whom would have also died), and nearly a million injured.” Many moviegoers look at these numbers with disgust.

Some films contain flawed logic, trains of thought that, at some point, hop off of the tracks and barrel through fields of plot. This occasional lapse of sound reasoning does not necessarily decrease the value of a film (in fact, some plots thrive on lapses of logic), but audiences should be aware of these deduction deficits so that similar logic pitfalls do not occur in their own lives. Enjoy the stupidity of movie characters, but don’t pretend that it’s not stupidity.

Flaw: Shia LaBeouf should lead you into battle. In this sci-fi action movie, Shia LaBeouf plays Farber, a teenage punk who cusses and objectifies women. He is also the protagonist’s friend. Though Farber really has no reason to exist in the film aside from providing some awkward and arguably unnecessary comic relief, director Alex Proyas includes a few scenes in which Farber and Detective Spooner discuss ladies and Farber’s poor use of profanity. During these conversations, nothing redeeming is revealed about LaBeouf’s character. Farber has no depth. He is a hormonal teenager who has managed, for some unknown reason, to befriend a renegade cop. Other than his friendship with Will Smith, Farber has absolutely no qualities that should inspire a mob to follow him into battle against a hoard of assertive robots. In fact, logic should dictate that when Farber starts to mock the robots, everyone else should back away, leaving Farber to deal with his own poor life decisions. In the movie, however, a large crowd of people, apparently unaware of Farber’s substandard leadership qualifications, stand behind the teenager, ready to charge. The result is pandemonium and pain for the humans as the robots toss people into the air like confetti. Farber, however, escapes unharmed, like a cockroach after a nuclear apocalypse. END_OF_DOCUMENT_TOKEN_TO_BE_REPLACED

Movies that sport simplified moralities have some charm. Good is good, and bad is bad. There are no ethical dilemmas to process. Captain Hook has few friends; Sharptooth is Littlefoot‘s enemy; and no one cheers for the Huns in Mulan. But, sometimes, our multifaceted minds overcome our oversimplified childhoods, and we fall to the temptations of a good moral dilemma.

The modern world of superheroes and masked villains is full of such ethical quandaries. In the early 1970s, Green Lantern and Green Arrow debated various sociopolitical issues, and Spider-Man became an anti-drug icon (long before Spider-Man 3, of course). These moral questions blurred the rigid lines of right and wrong that plagued early versions of some superhero universes.

In the spirit of absurdity, I have chosen three characters that represent various approaches to existing conditions and will offer some ideas about what a possible three-way brawl might look like.

The only verdict is vengeance; a vendetta held as a votive, not in vain, for the value and veracity of such shall one day vindicate the vigilant and the virtuous.

Watching V for Vendetta is a morally challenging experience. Or at least it should be. After the initial awe I experienced from watching a cleverly masked, cape-wearing, alliteration-abusing, knife-wielding, egg-cooking freedom fighter blow up buildings and dance around a secret hideout that could be featured on MTV Cribs, I realized that V is, in fact, a terrorist. In The Matrix, the Wachowski siblings dulled the moral backlash against violence by allowing the would-be terrorists to run around in a fake world. V for Vendetta, however, takes place in London. A future, dystopian version of London, but still London. V did not explode fabricated buildings inside a virtual reality with the power of his mind—he blew up real buildings in London. Aside from the possible sociopolitical arguments for anti-oppression coup d’états, V for Vendetta, the film, provides a platform for unrestricted violence against authority. At best, it is violence without adequate context. At worst, it is glorified Western terrorism.

And that is what makes V such a contender in the fight against the Joker and Rorschach. V is deliberate, confident, and he can do some crazy things with knives. He’s like a masked hibachi chef who has a problem with authority (which is, by the way, a wonderful idea for a new superhero). 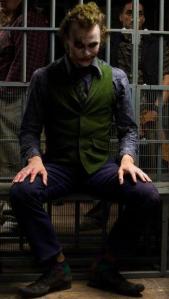 You see, madness, as you know, is like gravity. All it takes is a little push!

There have been many versions of the Joker. Heath Ledger played the Joker in Christopher Nolan’s The Dark Knight. And, before that, Jack Nicholson offered us an older, more bizarre Joker, a Joker that was a notch creepier than a birthday clown and a notch more acceptable than a birthday clown for a postpubescent birthday party.

There have been many animated versions of the Joker. Mark Hamill provided the Joker’s voice for a number of television shows and video games, and John DiMaggio, the guy who gives Futurama‘s Bender his voice, was the Joker in Batman: Under the Red Hood.

Think about that. The Joker has Luke Skywalker and Bender running through his voice box. If there were any character who could do justice to the juxtaposition of saber-wielding Skywalker and bolt-filled Bender, it’d be the Joker. As a villain, the Joker is a character that can make an audience laugh; question the appropriateness of laughing at dark, unprovoked violence; and then drown their moral apprehensions in cheers for more wit. As much as we love Batman, we don’t want to see the Joker die. Save Arkham Asylum for the unappealing villains like Killer Moth and Catman.

The Joker’s unpredictability is his greatest advantage. The Joker wouldn’t follow any of Brad Pitt‘s rules if he joined Fight Club. He’d wear a shirt and shoes AND tell all of friends about the group. And, if it were his first time at Fight Club, he wouldn’t fight. He’d just stand in the corner until the rest of the group forgot about him. Then he’d start multiple fights with multiple people. And then he’d leave because the Joker doesn’t join clubs.

Never compromise. Not even in the face of Armageddon.

Rorschach has the punch of wasabi and the cleansing power of sorbet. Rorschach is the Chuck Norris of grim superheroes. His Bauer-like no-nonsense attitude complements his Anton Chigurh brutality. He has the voice of Batman, the wit of Mr. Blonde, and the wardrobe of Dick Tracy. He employs a Corleone-style morality and a Dignam-ish sense of duty. He is, in a word, badass.

Rorschach fights criminal aggression with patient brutality. To say he fights fire with fire is to misrepresent Rorschach’s intensity. Rorschach fights fire with hotter, bigger, more awesome fire. His ironclad integrity allows him to take his struggles against criminality personally without losing motivation or willpower. And we love him for it. In Watchmen, Dr. Manhattan’s blue manhood may be enjoying a lot of fresh air, but it is Rorschach who steals the show.

Morally, Rorschach is problematic. Because he subscribes to an end-justifies-means philosophy, Rorschach’s actions often score high on immorality scales, but we don’t question his status as a good guy. His response to villains is villainy, but Rorschach himself is still a hero. This paradox is unraveled somewhat by Rorschach’s self-sacrificial actions at the end of Watchmen. Rorschach must step aside for peace to survive.

This is why I believe that, if they were ever to fight, Rorschach would beat V and the Joker. Rorschach’s intensity and personal conviction ultimately trump V’s intentionality and the Joker’s unpredictability. Before you disagree, watch this trailer one more time: