Prior to seeing Exit Through the Gift Shop (2010), I knew very little about the world of graffiti and street art. After seeing Banky’s film, I still know little about this world, but I now have a growing appreciation for those who can climb about rooftops late at night with large sheets of personalized paper and buckets of paste. And I have an even bigger appreciation for those who can do so with grace and style.

The film outlines the evolution of Thierry Guetta (later known as Mr. Brainwash), a hopelessly enthusiastic videographer and aspiring street artist. The film’s juxtaposition of Guetta with the suave, laid-back Banksy offers viewers a comedic introduction to a number of street art subtleties, not the least of which is the existence of street art imitators. Guetta, though endearing, is (spray-)painted as a somewhat annoying copycat of established street artists such as Shepard Fairey and Banksy. After discovering the world of street art, Guetta follows Fairey, Space Invader, and others as they make and share street art. Guetta documents the entire process, occasionally offering odd commentaries to otherwise stunning scenes. Guetta later tries his hand at beautifying cities with his own street art and eventually hosts his own high-profile art show as Mr. Brainwash. The transformation of Thierry Guetta into Mr. Brainwash challenges many assumptions about art and graffiti. Even Banksy himself wonders aloud (with perfect comedic timing) if art is truly accessible: “I used to encourage everyone I knew to make art; I don’t do that anymore.” 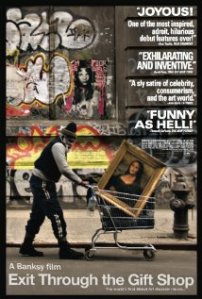 Exit Through the Gift Shop via IMDB.com

Some speculate that Exit Through the Gift Shop is another elaborate Banksy hoax. Perhaps Banksy hired Thierry Guetta. Or, maybe, Guetta and Banksy are one and the same. As a recent convert to the wonders of street art, including the works and character of Bansky, I have no guess as to how the film came to be. Hoax or not, Banksy’s film is wickedly entertaining and offers a commentary on some genuine issues within the world of street art. The film, despite its aggressive satire, is surprisingly inspirational. Were my drawings anything more than oddly high-brow stick figures, I’d be tempted to share them with the world. For those, like me, who don’t have great artistic abilities, Exit Through the Gift Shop is an entertaining reminder that beauty can be found (and put) anywhere. Amidst this often misunderstood counter-cultural movement, true art can emerge.

Exit Through the Gift Shop, Banksy’s directorial debut, received a Oscar nomination in the Documentary Feature category, and Banksy was nominated for an award from the British Academy of Film and Television Arts (BAFTA) for Outstanding Debut by a British Writer, Director or Producer. In the Oscar race, I’m rooting for Exit Through the Gift Shop. I have nothing against the other Documentary Feature nominees (Gasland, Inside Job, Restrepo, and Waste Land), but I’m curious if Banksy would show up to accept his award.